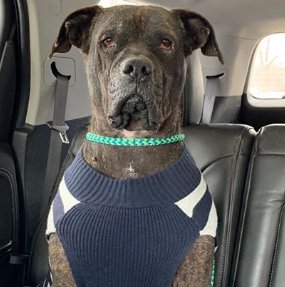 Early last June, some teens were going to their secret swimming hole in the middle of nowhere. Instead, they ran across a dog so dehydrated, sick, and starved, he could not get up to walk. These teens cancelled the fun swim, and instead picked up the dog, who was later named Peter and carried him back for a mile back to their vehicle. Even though the dog was in such poor condition, he was still heavy.

One of the teen boys took him home but his family couldn’t keep Peter. Peter was surrendered to HSCC with the PROMISE that the shelter would do everything they could to help him; they would NOT euthanize him. The boy checked on Peter often.

Why Peter was so special: Despite EVERYTHING he had going against him (huge 39″ chested black toothless pitbull completely naked from mange and infected skin so bad that his coat didn’t even come back after 7 months of extensive care; teeth had been filed to the gumline; he was heartworm positive; chronically infected eyes from entropian) Peter was the kindest, most gentle giant any of us had ever met. One of our rescue pullers met him at the shelter to test him for possible foster. He sat quietly beside her outside; his naked shoulder gently supporting her as she sat there. He passed every test.

Peter was a regular at the vet and the staff adored him. After 7 months of treating everything possible, it was time for him to go to rescue. This wonderful boy went to Spot’s Last Stop Rescue. The rescue puller told them he was the most special boy in the world and BOY DID THEY UNDERSTAND once they had him. A toddler could feed him safely if left alone together. He was outside at his foster’s house one day and a bird landed on his nose briefly, he was lying so still resting and he didn’t even flinch. He seemed to be honored a songbird landed on him. This dog is perfect personality-wise in EVERY WAY.

Today Peter has a human family and two dog siblings. He’s healthy and happy and loved and never has to face such a horrible future again.