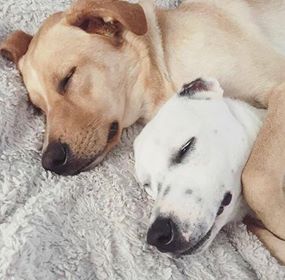 Charming, and her brother Skeeter, were brought to the HSCC with their ears cut off, it appeared to have been done with a pair of scissors.

It’s very likely that they were intended to be bait dogs.

Despite the offer of a reward, no one was ever caught. Charming, and her brother, went to one of our rescue partners who found them wonderful forever homes.

The story about Charming and Skeeter was featured on several local news stations in an effort to find the dog fighters responsible.

Retired Major League Baseball pitcher Roy Halladay, along with his wife Brandy and her mother flew to Clanton to pick up Charming and Skeeter and took them to their rescue.